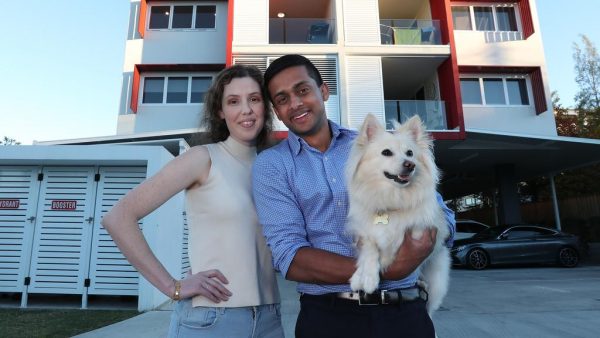 Grace and Sanath Hettiarachchi and their puppy Millie outside their apartment at 10/76 William Terrace, Oxley, which they now have on the market with a view to buying a house. Picture: Annette Dew.

A massive jump in house prices is forecast for Brisbane over the coming three years, almost double the nearest Australian state capital, with major Queensland cities close behind.

Latest analysis by BIS Oxford Economics has forecast a massive 20 per cent growth in house prices in Brisbane, with demand driven by its relative affordability compared to other capitals and a pick-up in positivity.

Its Residential Property Prospects 2019—2022 has the city’s median house price growing at almost double the speed of the nearest growth capitals Adelaide (11 per cent) and Canberra (10 per cent). In contrast, prices in Sydney (6 per cent) and Melbourne) were set to remain in single digits in terms of percentage growth over the three years.

Affordability best it’s been since the 1990s

This as the latest Deloitte Access Economics Business Outlook, out Monday, predicted Queensland would be among the biggest beneficiaries of a major shift in the economy, with stimulus coming out of rising coal prices pushed by Chinese demand, expectations that farmers have a better season coming up, and rising housing demand driven by interstate migration.

BIS Oxford Economics associate director Angie Zigomanis expected Brisbane to be a big winner by the end of 2022, bucking the slow recovering coming out of southern markets.

“The next 12 months we still expect (house price growth) to be fairly weak in Brisbane but moving into 2020 is when it will pick up,” he told The Courier-Mail.

He said Brisbane was shaking off factors that had kept it down including a lack of employment and income growth, plus a big upturn in housing supply particularly in the apartment market.

“The best thing people can do is to buy a block that has plenty of potential and can buy those in Oxley and Corinda for under $750,000. Also over the last few years some towers were built along this corridor and the talk of oversupply a few years seems to have gone away. We believe buyers for those units have always been around and are now committing again. To be able to buy a two bed apartment eight train stops from the city for $419,000 makes sense.”

Grace and Sanath Hettiarachchi and their puppy Millie have their apartment at 10/76 William Terrace, Oxley, on the market, with a view to buying a house with land for the family they hope to start.

“We are at the stage of our lives where we hope to start a family in the next couple of years,” Mr Hettiarachchi said. “We are hoping to buy a house on land with subdivision potential in the western suburbs of Brisbane.”

“We have our hearts set on Oxley and Corinda where properties are still affordable and have potential for growth. We were at first sceptical to see buyers paying $500,000 for a 800sq m block in Oxley a few years ago however now the same blocks are about $650,000. The same can be said about apartments in the area given the close proximity to beautiful parks, shops and cafes, and only a 20 minute train ride to the city.”

Grace and Sanath Hettiarachchi and their puppy Millie at their 10/76 William Terrace, Oxley. The couple hope to start a family in a few years in a house with land. Picture: Annette Dew.

“The alternative option is to buy even closer to the city in “blue chip” suburbs however for those such as ourselves starting out, we have to venture out further to be able to live in a home that can support a family and not put any unnecessary financial pressure on ourselves. The key thing for us was to get into the market as soon as we could and buy into potential growth areas.”

Of the prospects of stronger growth out of Brisbane, he said Brisbane had come a long way in the last couple of years.

“With the continuing developments at the moment, it certainly has the infrastructure to support such demand. The lower than average property prices when compared to other states coupled with the great weather makes Brisbane very appealing.”

Deloitte Access Economics partner, Chris Richardson, said Queensland was perfectly positioned to make the most of coming stimulus both nationally and internationally.

“There is more stimulus coming than people realise,” he told The Courier-Mail.

“This is the first time ever that the Reserve Bank is cutting interest rates rapidly, not because the economy is softer, but mainly because it’s changed its mind about what unemployment rate is required to get wages moving faster.

“Because of that change of mind out of RBA, Queensland is getting a stimulus pretty much from everywhere. The world has given Australia a payrise, and coal is very central to what’s happening. It’s not just more money flowing into Australia but also renewed interest in building coal mines in the Galilee Basin.”

“As well, Queensland also gets the full force of national stimulus around interest rates and exchange rates. The drought has ben pretty nasty in Queensland, but broadly we wouldn’t expect the coming farm season to be as awful as the last one.

“Think of that combination and think of Queensland’s economy — there’s farmers and miners getting benefit with the drought less nasty, China pumping out stimulus and then there’s mums and dads with government stimulus and interest rate combinations.”

He said when house prices in Sydney and Melbourne, the past trend was that Brisbane would follow.

“Eventually you get faster population growth in Queensland, and that’s exactly what happening at the moment. It took longer than it usually does but that is very much the story of the moment.”